Experience the most exciting tales of America’s Pastime! A must-have for any baseball fan.

Baseball, America’s pastime, is a sport of moments that stand the test of time. It is equally a sport of a new generation of heroes, whose exploits inspire today’s young fans. This combination makes for a winning debut in Legends: The Best Players, Games, and Teams in Baseball.

This is no traditional almanac of mundane statistics, but rather a storyteller’s journey through baseball’s storied game. Told in fun, accessible chapters and accompanied by iconic photos, a slew of Top Ten lists for kids to chew on and debate, and a Timeline of the 40 Most Important Moments in Baseball History, this collection covers some of the greatest players from Babe Ruth to Hank Aaron; the greatest teams to take the field and swing the bats; the greatest social triggers, such as Jackie Robinson’s breaking of the color barrier; the greatest playoff rivalries, including the 2004 showdown between the Red Sox and Yankees that turned into an instant classic; and, of course, the edge-of-your-seat World Series moments that left some cheering while others wept. This is the perfect book for young fans eager to learn more about the sport that will stay with them for a lifetime. 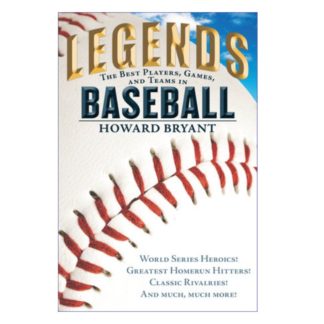