The Official Bananagrams book is filled with fun word puzzles that will keep your brain occupied for long car rides or long waits at the dentist’s office.

Game of the Year winner at the 2009 International Toy Fair, Bananagrams is the international phenomenon that started with a simple idea: “An anagram game that is so fast it will drive you bananas!” Doing for letters what Sudoku did for numbers, it’s the obsessive new puzzle craze that starts with 144 letter tiles in a banana-shaped bag and captures all the fun of crosswords and word games like Scrabble and Boggle.

Now comes Bananagrams! The Official Book, which translates the brain-twisting word fun of the game onto the page, and adds much, much more. Even if you’ve never dipped your hand into the Bananagrams pouch, the book stands on its own with hours of challenging play. Written by the only three-time National Scrabble Champion, Joe Edley, Bananagrams! offers sixteen clever puzzle types, including Banana Trees, where the object is to build word grids based on a theme; Banana Splits, a collection of four quick anagram puzzles to be solved in rapid-fire style; Banana Leaves, with its four-, five-, six- and seven-letter words; Banana Filling—what happens when you add a “K”?; and more. The puzzles have four levels of difficulty, from one banana to four bananas. Plus, there are glossaries; special strategies for Bananagrams: The Game; a list of “Weords”—weird words that are cool to play; two- and three-letter words to take your game to the next level; fun banana facts; and, of course, an answer key. 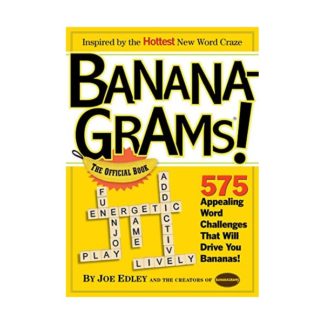 You're viewing: Bananagrams! The Official Book $9.95
Add to cart