Every dinosaur lover will want to add the deadly Herrerasaurus to their collection!

The Herrerasaurus was one of the first prehistoric saurians to dominate the earth 220 million years ago. It was a dangerous hunter who moved on two legs and had sharp, serrated teeth.
The Herrerasaurus was somewhat small compared with the Giganotosaurus and Spinosaurus, who lived much later on. It was only 10 to 13 feet long. In return, its legs were very strong, and it could move about as fast as an Olympic sprinter. For a dinosaur, the Herrerasaurus had a rather unusual lower jaw, which it could slide back and forth by means of a flexible joint. This allowed it to better grasp its prey. It was named after the Argentinian goatherd Victorino Herrera, who chanced upon its skeleton in 1959.
This 2.953″ x 9.134″ x 4.921″ toy is authentically detailed, and is ideal for hours of imaginative play.
Ages 4+ 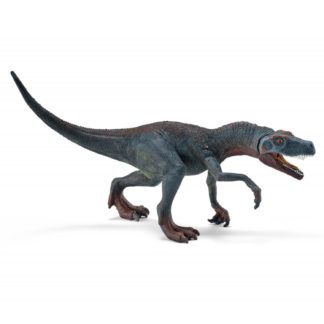 You're viewing: Herrerasaurus $21.99
Add to cart