Exciting gameplay with vivid artwork, players compete to summon heroes of legend through the portals, then use their powers and magic gems to activate them as they race to save the realm and win the game

The portals of Molthar have opened! The players travel through the portal into a world of a type that you know only through folklore and fairy tales. By collecting magic pearls and trading them in a timely fashion for fantastic and powerful character cards, you draw ever closer to victory — but only the one who first manages to gather twelve insignias of power will save Molthar and win the game.

At the start of Portal of Heroes, four pearl cards and two character cards lie face up in the middle of the table. The rest of the character and pearl cards are set nearby in separate decks. Each player receives their own player portal and places it face up in front of them.

Each turn, you can take three actions from a menu of four options: Take a pearl card into your hand, replace all of the pearl cards in the display, place a character card on your portal, or activate a character. You can perform any of the four possible actions multiple times, and in any order. To activate a character, you must play a specific combination of pearl cards from your hand onto the character card. Activated characters grant you power points, diamonds, or special abilities. Once you have activated characters this way with twelve or more power points then that round becomes the penultimate one. Whoever has the most power points at the end of the game wins with diamonds acting as a tie breaker. 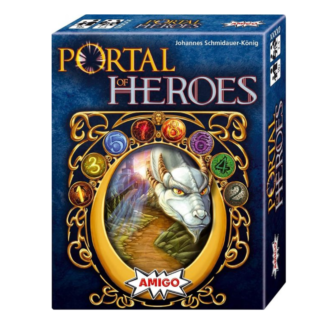