Merry Men expands Sheriff of Nottingham to six players as you bluff, bribe, and negotiate your goods into Nottingham!

Only 1 left in stock

A 6-PLAYER EXPANSION FOR THE HIT GAME SHERIFF OF NOTTINGHAM!
The rumors about smugglers are all over Nottingham’s alleys. In the last year, the Sheriff has confiscated a lot of illegal goods, but surely he needs help! A Black Market has formed in the alleys, full of special demands from those inside. This has caused a rise in the number of smugglers, including many experienced thieves. Two Deputies were hired by the Sheriff in response. Prepare your illegal goods, follow the new laws, and fulfill the peoples demands! Merry Men join your group in order to profit even more! 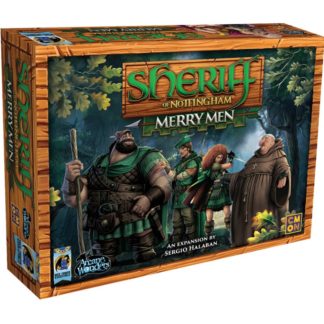