Make bathtime more fun with glowing Glo Pals! Initially developed as a tool to help children with autism and sensory anxiety, Glo Pals are now available to any child who needs coaxing into the tub. Each package contains one Glo Pals character and two light cubes.

The Glo Pals® were inspired by a child with autism whose mother used the technology behind Glo Pals® to help him overcome his fear of water. His story influenced the development of the Glo Pal® characters and our mission to create a product that engages children in sensory exercises and brightens bath time.

Each Pal is designed with a unique personality to celebrate the things that make each of us one-of-a-kind.

Insert your Glo Pals Light-Up Cube into the back of each Pal, drop it in the water, and watch it light up! Featuring bendable arms and colorful personalities, each Pal proudly illustrates the uniqueness in every child! Each Glo Pal comes with two Glo Pals Light-Up Cubes included in the box!

HOW TO CARE FOR YOUR GLO PALS: Remove Light-Up Cube from the back of the Glo Pal Character. Blow through small slots on the sides of each Light-Up Cube. Store Light-Up Cube in a dry location for longer battery life. 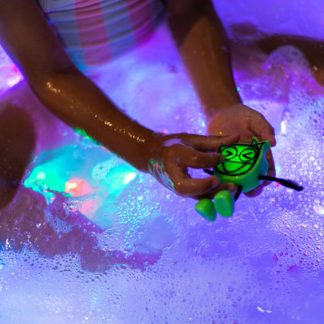